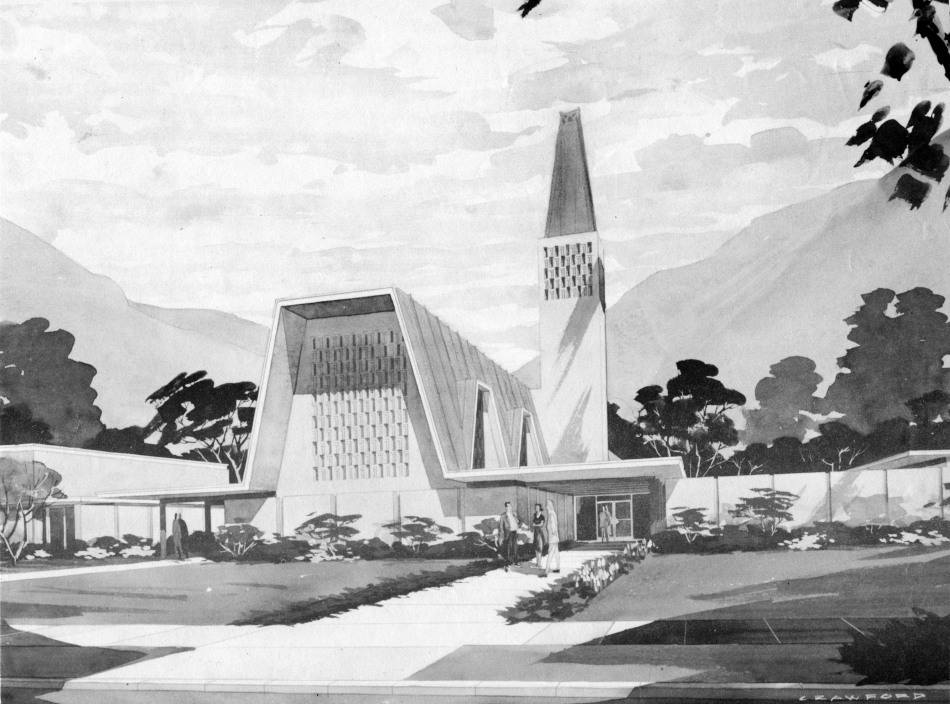 “Architectural drawing of the LDS stake building, known colloquially as the ‘Golden Toaster,’ built in 1962.” (Image courtesy Special Collections & Archives, Merrill Library, Utah State University) This rendering was featured as the cover of the dedicatory program.

This meetinghouse, designed by James H McCrea, was built as the U.S.U. Stake Center, containing two chapels to accommodate four University wards, the USU First, Fifth, Seventh and Eighth wards. Groundbreaking occurred on May 2, 1961 and was done by President David O Mckay. The event was shared with a groundbreaking for the Student Living Center on Campus, which would eventually be named in honor of President Mckay. All the speakers referred to how memorable and significant the occasion was. The building would eventually cost $700,000 to build. Dedication took place a year later, on Sunday June 3, 1962 with services under the direction of the Stake Presidency – Reed Bullen, Wendell O Rich, and Leonard J Arrington. Speaking at the event was University President Daryl Chase. President David O Mckay gave the final address and then offered the dedicatory prayer. At the end of the services a Hosannah anthem was sung followed by the singing of ‘The Spirit of God Like a Fire is Burning.’

This building is scheduled to be given to the University in exchange for another site, after which it will be demolished.