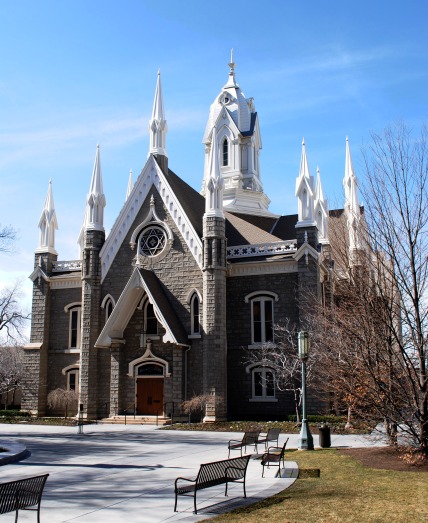 Construction began on this Victorian Gothic Tabernacle on August 11, 1877. The architect was Obed Taylor, one of six architects in the city in 1879. By April 7, 1880 the building was opened to the public and a description was given of the work still needing to be done. It was stated that the building was nearing completion. Sometime later that year the building was completed because on August 7, 1880 a Priesthood meeting was held there. Almost a year after this, the architect unexpectedly died on August 2, 1881. The funeral services in the Deseret News stated of him, “The Salt Lake Assembly Hall is a sample of his skill in that line, and although Obed has been summoned from our midst, that structure alone will always keep his name in the fond remembrance of this people.” (Deseret News 2 Aug 1881) The building would officially be dedicated by President Joseph F Smith on January 8, 1882 at a 2pm session of Stake Conference. (ibid. 18 Jan 1882)

With seating capacity for nearly 2000 people, the building was constructed with left-over granite from the Salt Lake Temple. A feature included a four-foot weather vane of a flying angel at the top of the tower. Additionally, the truncated spires used to function as chimneys. In 1882 the Provo Tabernacle by William Folsom would be patterned after this design at the request of local Church leaders. Folsom and Taylor had previously worked together on the ZCMI cast-iron facade, which incidentally is making another debut tomorrow as part of the new City Creek Center opening. As a result, the plans of these two Tabernacles were similar with the original interiors nearly identical. (Nineteenth-Century Mormon Architecture & City Planning, page 72-73.)