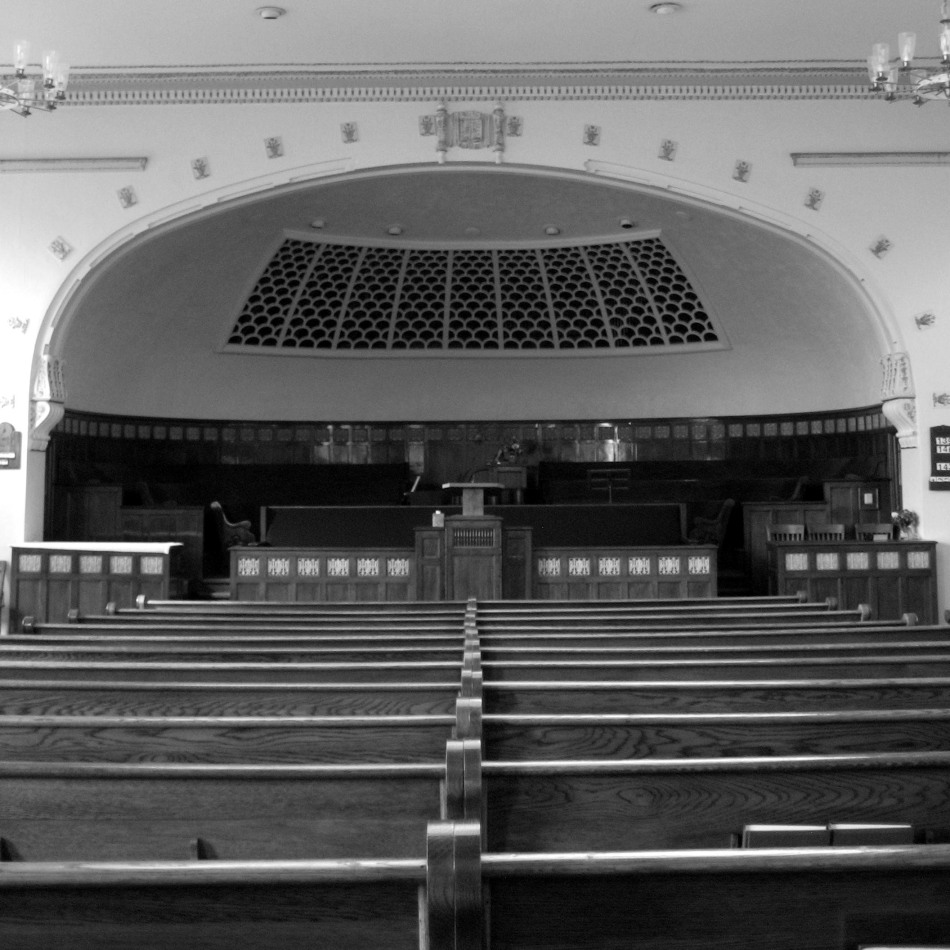 A competition was held to select an architect for this meetinghouse, and the person selected was ward member Peter Mortensen. His 1901 design for the building was a three-spired classical building. Foundation work began that year on the building. By December, Mortensen had an accumulated debt of $3800 for lumber materials on other projects. The treasurer for the lumber company was James Hay. Mortensen invited Hay to his home on the evening of December 16th to pay the debt. Hay went to Mortensen’s home but was never seen alive again. His body was discovered the next morning buried in a fresh mound of dirt in a close-by field.

Of course the incident brought construction of the meetinghouse to a halt and brought a division in the ward. Mortensen neither admitted nor denied that he was guilty of the crime, but was tried in court for the murder. Half of the members of the ward “knew” he was not guilty and the other half “knew” he was. Those for Mortensen wanted the building to go ahead as he had planned. Those against would not contribute another penny toward its erection using his design. The impasse was cleared up by holding another competition to provide a new meetinghouse design to be used on the existing foundation. A design submitted by architect Samuel Whitaker was accepted in April 1902. After the new design was developed, construction on the meetinghouse resumed. Paralleling the ongoing construction was the trial, which continued with great drama described by the Salt Lake Tribune as “the most celebrated murder trial since the days of John D. Lee and the Mountain Meadow massacre.” Mortensen’s attorneys received a death threat in July 1902 if they continued to defend him. “Your house and home will be blown to atoms in case you make a motion for a new trial.” The case continued without incident and Mortensen was tried, convicted and executed in November 1903, receiving coverage as far as the New York Times. He was the ninth person to be executed by the state. The following month, the meetinghouse was completed and began to be used for services. Dedication services took place in 1905 by Church President Joseph F Smith.

The design of the new meetinghouse by Samuel Whitaker was quite different in appearance than Mortensen’s design, having a circular dome feature in the center of the chapel, rather than the three spires at the front of the building. Unique to LDS meetinghouses, the dome opened to the chapel space providing beautiful natural light through clerestory windows. The original rostrum had classical columns on each side of the chapel. These were removed in 1929 by Cannon and Fetzer who also added classrooms and hallways to connect to the cultural hall built at the rear of the building in 1913. During the 1970’s the interior of the dome was covered over with a ceiling, but was opened again during a remodel in 1986.

This was the first building we visited on the tour and also the oldest meetinghouse still standing in Ogden. The tour actually mostly went from oldest to newest. By a completely random fluke I stumbled upon the owners of this building in Layton so we were able to get inside and see the building. I’m excited they are going to renovate – it’s a great building and a great location. I’ll post interior pictures I took shortly.

This handsome house of worship was opened for religious services on Sunday, Jan 9, 1910, the auditorium being filled to its capacity on the occasion. The building is admirably adapted for all ward purposes, the Sunday school, priesthood and auxiliary organizations being conveniently provided for. The auditorium has a seating capacity of 400. The seven class rooms, located in the lower story, have a capacity of 700. Besides the auditorium, the first floor contains the library, bishop’s office and choir niche, and a suite of private rooms. The site upon which the building stands cost $2,500, and the building with appurtenances $20,000. The structure was designed and built under the direction of S. T. Whitaker, architect. (15 Jan 1910 Deseret News)

March 1930 the ward was busy erecting an addition to the meetinghouse intended for a Recreation hall. The building at this time was nearly completed, containing five classrooms, Relief Society room with kitchen, cloak rooms, dressing rooms, etc. The new building cost $60,000 including a number of improvements and a general renovation of the chapel.

Mar 29, 1957 Plans to remodel the 6th ward chapel have been estimated and a fund drive was held. $1000 was collected. Remodeling was started in May.

Dec 1962 A new landing between the amusement hall and the outside was poured.

Feb 1963 The building sustained some damage during a windstorm. There were some bricks on the chimney that fell and the door in from the east side of the building was wrenched from its hinges. Damage was repaired during the next week.

Oct 1966 Repairs and decoration of the cultural hall began and were completed in December.

Nov 6, 1966 Lightning struck a transformer near the west side of the meetinghouse causing high voltage to enter the building. Utah Power and Light technicians failed to reason why the building did not catch fire. A specific mention of the building to be protected from fire was found in the Dedicatory prayer by Apostle James E. Talmage in 1910. Also in November, the Remodeling of the Junior Sunday School Rooms per instruction of the Church Youth Guidance Committee is progressing nicely and should be completed by January.

Mar 1967 Southeast basement corner of building is remodeled into special rooms and reception center for Youth Counseling and Instruction, which is a new program of the Church in conjunction with the Relief Society.

By 1981 the building was vacant and remained empty until 1987 when it was purchased and used as an Assembly of God church. Various denominations used it until 2008 when it again became vacant. Plans by current owners are to remodel the building into a wedding reception center.