I was excited to find out today that the Cedar City 1st Ward building, or historic Rock Church, will be Rededicated this Sunday after closing last year for renovations. The dedication will be at 6pm and the building will be open for tours both before and after from 5pm-8pm. I have not been to visit the building yet, but from what I understand, the Cultural Hall has been restored to its original design, including removal of carpet for the original hardwood floors and removal of the wall panels that covered the windows. The radiators were left for historical reasons, even though the building now has central heating and cooling. The original pews have been restored and the font and mural still remain even though it is no longer functional. This building was built when the original Tabernacle on Center and Main was sold to the Government to be demolished for a new Post Office, but the still-working clock from the Tabernacle can be seen in the steeple.

The original building included a Relief Society Room, Kitchen, Boy Scout Room which opened up to a baptismal font, and many classrooms in the basement. On the main floor was the Amusement Hall (left side of photo), Chapel perpendicular to the hall (the main roof length in the photo) and a Reception Hall between the two, just off the main entry which is obscured by the tree. The Reception Hall contained a fireplace and opened up on both sides to connect both large assembly spaces. The only other room on the main floor was a Bishop’s Room which can be seen as the gabled bump-out on the right side of the photo with the chimney coming out of it. This Bishop’s room not only had a fireplace, but also a small toilet room. The only access to the office was directly from the Rostrum at the front of the Chapel. Below this office was the font.

A 1973 remodel changed the Bishop’s restroom into a small Clerk’s office and the Organ chamber behind the rostrum into a classroom. Finally, in 1986 a nicely-built wing was added perpendicular to the back side of the Chapel containing two Bishop’s offices, Clerk, main level restrooms and classrooms. Today the exterior remains largely unchanged, except for the addition of a steeple to the building. 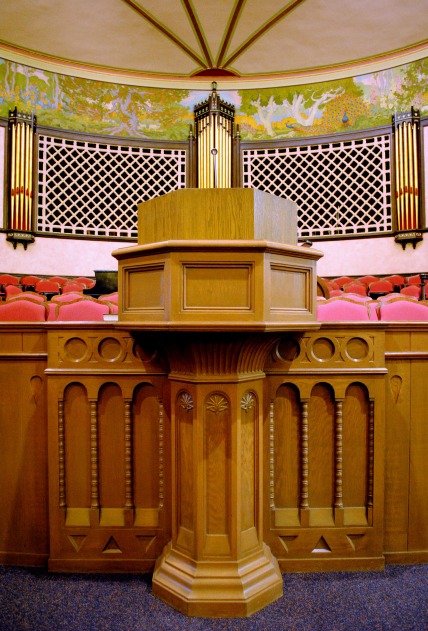